Get ready, all you land lubbers, because it’s a pARGHty over here on YA and Wine today!!! I am a HUGE pirate fan, and I am so, SO excited to go see Pirates of the Caribbean: Dead Men Tell No Tales this weekend!

But I am even more excited about the release of the cover of Daughter of the Siren Queen, book two of Tricia Levenseller’s hit debut novel Daughter of the Pirate King! Blimey, I can’t wait to get my hands on what I expect will be a swashbuckling, magical adventure of a story! Just take a look at this beauty! 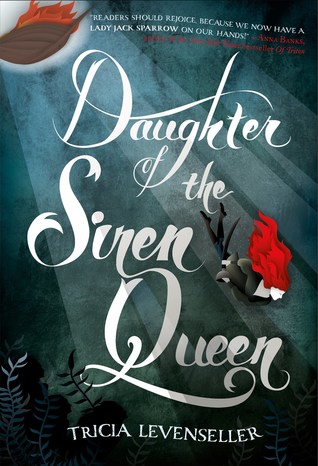 What better way to celebrate all this piratey goodness than with a giveaway! So check out the details of the book below and then enter to win a copy of Daughter of the Pirate King!

About Daughter of the Pirate of the King

There will be plenty of time for me to beat him soundly once I’ve gotten what I came for.

Sent on a mission to retrieve an ancient hidden map—the key to a legendary treasure trove—seventeen-year-old pirate captain Alosa deliberately allows herself to be captured by her enemies, giving her the perfect opportunity to search their ship.

More than a match for the ruthless pirate crew, Alosa has only one thing standing between her and the map: her captor, the unexpectedly clever and unfairly attractive first mate, Riden. But not to worry, for Alosa has a few tricks up her sleeve, and no lone pirate can stop the Daughter of the Pirate King.

Check out my full review of Daughter of the Pirate King here!

Enter to win one hardcover copy of Tricia Levenseller’s Daughter of the Pirate King!

27 thoughts on “Pirate pARGHty and giveaway!!!”