**TRIGGER WARNING: This book and interview does discuss eating disorders.**

I am so thrilled to have Alexandra Ballard on the blog today to discuss her upcoming novel What I Lost. Eating disorders in young adults is a topic that certainly hits home for me personally, so I think it’s so important to see them in literature and to constantly be raising awareness about them.

That said, I also know that reading books about this topics can serve as triggers for certain individuals, so if you have been impacted with an eating disorder either in the past or present, please read both this book and the following interview with caution.

About What I Lost 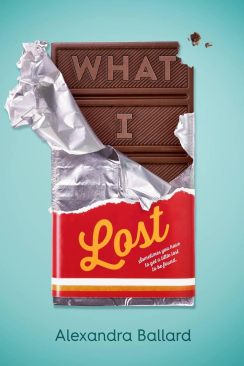 Title: WHAT I LOST

What sixteen-year-old Elizabeth has lost so far: forty pounds, four jean sizes, a boyfriend, and her peace of mind. As a result, she’s finally a size zero. She’s also the newest resident at Wallingfield, a treatment center for girls like her—girls with eating disorders. Elizabeth is determined to endure the program so she can go back home, where she plans to start restricting her food intake again.She’s pretty sure her mom, who has her own size-zero obsession, needs treatment as much as she does. Maybe even more. Then Elizabeth begins receiving mysterious packages. Are they from her ex-boyfriend, a secret admirer, or someone playing a cruel trick?

This eloquent debut novel rings with authenticity as it follows Elizabeth’s journey to taking an active role in her recovery, hoping to get back all that she lost.

Eating disorders are so dangerous and prevalent in our society today, especially in young adults. What inspired you to tackle this topic in a YA novel?

Before I wrote WHAT I LOST, I was a middle school teacher and was amazed at the amount of time my students, especially the girls, spent talking about their flaws, their diets, and worrying about how much they’d eaten. I had students whose moms challenged them to see who could lose more weight first, and other kids who just felt miserable in their skin. Plus, I’ve had eating issues in the past, and I don’t know any woman who doesn’t deal at some level with body image concerns. I was also concerned about how eating disorders are still sometimes viewed as a positive—that people, often girls, still say they wish they had one so they could lose weight. That scared me, so I wanted to write as realistic a depiction as I could so they’d know how it really felt to suffer from one of these diseases.

What was the most challenging part of writing What I Lost for you?

I think the most challenging part was believing in myself, that I was actually a writer who could pull this off. I was convinced that no one, ever, would want to read what I’d written. Sometimes I’m still amazed that people are reading my book, but now it is a happy amazed, and I’m proud of what I’ve accomplished.

Are there any characters in this book that you really identified with yourself?

I think that I relate to all of the characters somewhat. I’ve been Elizabeth, I’ve been Margot, I’ve been Katrina, worrying about a friend. As a parent I can relate to how worried and scared Elizabeth’s mom and dad are for her. When I write, I invest tiny parts of myself in each of my characters. Otherwise I have a hard time getting into their heads. It is usually something small; I might give a character a tiny insecurity of mine, or a strength. Something that I can use as an entry port into their minds.

Since this is your debut novel, what has been the most exciting part of the publishing process for you so far?

Every part of the process has been exciting! The day I spoke to my editor on the phone for the first time, the moment I received my advance reader’s copy, the day (last week!) when I received my first hardcover—even the first time I saw it up on Amazon. It’s all exciting. But I think the most amazing moment for me was the first time an agent called, asking to represent my book. I hadn’t shared the manuscript with many people at that point and couldn’t believe that someone who didn’t know me would not only read the whole thing, but actually believed in it enough to want to go out there and sell it. It was an incredible feeling. I smiled for hours. It was the first time that I realized that this little project of mine, that Elizabeth, might have a chance out there in the world.

Are there any contemporary YA novels that you would say have had a positive influence on your own writing?

Yes! So many. I read Jennifer Niven’s amazing book ALL THE BRIGHT PLACES when I was in the middle of a draft and I studied it like a manual. Other books, too, like Kathleen Glasgow’s GIRL IN PIECES for its gorgeous prose, Kerry Kletter’s THE FIRST TIME SHE DROWNED for the way she made her characters—good and bad—come to life, DARK WATER by Laura McNeal for its absolutely gorgeous setting descriptions and heartbreaking story. Julie Buxbaum’s TELL ME THREE THINGS for the voice. I just finished THE HATE U GIVE by Angie Thomas and it inspired me to work harder. And then there’s the YA books I go back to for inspiration over and over again, like Sherman Alexie’s ABSOLUTELY TRUE DIARY OF A PART-TIME INDIAN, anything by Laurie Halse Anderson, Rainbow Rowell or Sara Zarr. Sarah Dessen’s books have always inspired me. And then of course there’s Nicola Yoon. I just finished THE SUN IS ALSO A STAR and she’s making me want to write in multiple POVs. If I could pull them off half as successfully as she does I’d be grateful.

If there is any message that you would want your readers to walk away with after reading this book, what would it be?

For readers who might be struggling with an eating disorder, I wanted my book to be a beacon of hope, but a realistic one. Eating disorders are very hard to recover from. The fact of the matter is, if you have an ED, you have to work hard to get well. It won’t happen unless you fight for yourself. But getting well is so worth it. I also wanted to raise awareness about these diseases. So many people don’t understand that an eating disorder is a mental illness. I hope that WHAT I LOST sheds a little light on how hard it is to have one of these diseases, that they are so much more than just wanting to look like a model in a magazine. They are complex, ugly beasts, but there is so much hope. Recovery is possible, and it is one-hundred-percent worth it. 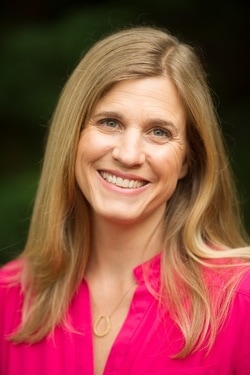 Alexandra Ballard has worked as a magazine editor, middle-school English teacher, freelance writer, and cake maker. She holds master’s from both Columbia (journalism) and Fordham (education) and spent ten years in the classroom, beginning in the Bronx and ending up in the hills of California. Today she writes full time and lives in the Bay Area with her husband, two daughters, and two dogs. What I Lost is Alexandra’s first novel.

3 winners will receive a finished copy of WHAT I LOST, US Only.

14 thoughts on “WHAT I LOST Blog Tour and Giveaway!”