Happy Monday and welcome to the weekly #ARCstravaganza! I am so excited to feature Emily R. King’s The Fire Queen this week. Not only did I LOVE the first book in this series, but I’m also on a huge Wonder Woman high after watching that incredible movie, and I am so in the mood to read about some seriously kick-butt women. I’m going to be starting this beauty today and couldn’t be more excited!

I’m also so honored to get to read an early copy of this one. The Hundredth Queen meant a lot to me. I feel like I’m personally in a space where I need to be reading examples of women who exhibit physical, mental, and emotional strength, and Kalinda and the other amazing women in this series certainly do that. They inspire me to overcome some of my own obstacles, and I’m so grateful that books like this exist in the world. To publishers out there, I say please keep them coming!

If you would like to participate in the #ARCstravaganza and enter to win an ARC of an upcoming YA release, please follow the instructions below and feel free to use our #ARCstravaganza graphic and info below in your own posts.

#ARCstravaganza is a weekly meme hosted by Krysti at YA and Wine and Sarah at The Clever Reader to give book bloggers/bookstagrammers a chance to show off those ARCs/eARCs/Galleys! Comment on their weekly posts with a link to your own #ARCstravaganza blog post, or post a pic on Instagram using the #ARCstravaganza hashtag, and you will be entered to win an ARC copy of an upcoming YA novel! One winner will be chosen at random each month!

The Fire Queen by Emily King

About The Fire Queen 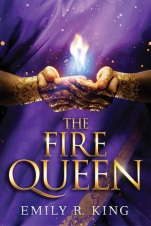 In the second book in The Hundredth Queen Series, Emily R. King once again follows a young warrior queen’s rise to meet her destiny in a richly imagined world of sorcery and forbidden powers.

Though the tyrant rajah she was forced to marry is dead, Kalinda’s troubles are far from over. A warlord has invaded the imperial city, and now she’s in exile. But she isn’t alone. Kalinda has the allegiance of Captain Deven Naik, her guard and beloved, imprisoned for treason and stripped of command. With the empire at war, their best hope is to find Prince Ashwin, the rajah’s son, who has promised Deven’s freedom on one condition: that Kalinda will fight and defeat three formidable opponents.

But as Kalinda’s tournament strengths are once again challenged, so too is her relationship with Deven. While Deven fears her powers, Ashwin reveres them—as well as the courageous woman who wields them. Kalinda comes to regard Ashwin as the only man who can repair a warring world and finds herself torn between her allegiance to Deven and a newly found respect for the young prince.

With both the responsibility to protect her people and the fate of those she loves weighing heavily upon her, Kalinda is forced again to compete. She must test the limits of her fire powers and her hard-won wisdom. But will that be enough to unite the empire without sacrificing all she holds dear?

Alright it’s your turn! Show us those ARCs/eARCs/Galleys you’ve received that you are most excited about! Feel free to take pics to share on your blog posts/bookstagrams, do a book feature, or get creative! We can’t wait to see what you all come up with!

13 thoughts on “#ARCstravaganza: THE FIRE QUEEN”